The NRD’s Outdoor Classroom Programs were developed to provide funding to promote the education of our natural resources through hands-on learning.  Funding is provided through three types of grants: Outdoor Classroom, Community Grants, and Mini-School Grants (applications below).

Providing lessons in nature ensure that children today are growing up with meaningful daily connections to nature. When children spend time in nature-filled outdoor learning environments, research shows that conflict is replaced by pleasant and positive exploration.

The Community Grants Program is to promote water, soil, wildlife, forest, grassland conservation and environmental awareness. Community organizations may request up to $2,000 to provide natural resources awareness to the public or youth. This is a competitive grant and may be applied for at any time. NRD boundaries include all of Dawson County and parts of Frontier, Custer, Buffalo, Hall, Howard, Nance, Merrick, Hamilton Platte and Polk counties in Nebraska.

Community organization and/or non-profit groups may request funds to help with costs to promote indoor/outdoor conservation projects, presentations, print materials, activity materials, educational resources, etc. The Community Grant requires no matching funds. The methods used to promote environmental and conservation awareness and a timeline to meet your goal(s) must be included in the application. 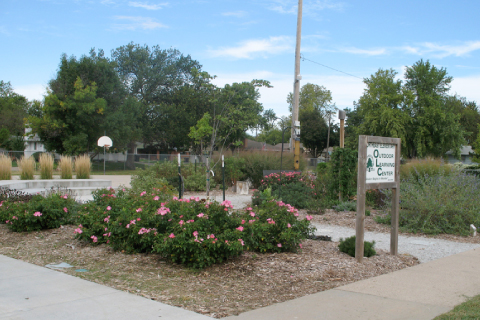 Kearney Public Schools Foundation
$1,335 approved to improve educational opportunities in the Outdoor Learning Area at Kearney High School. Copies of the book 40 Chances by Howard Buffett and signage for the school’s wetland area were approved for funding in the amount of $1,335.

Stick Creek Kids Child Development Center
$2,500 approved to expand the sensory garden in their natural playground including native plants and learning features such as a mud kitchen and a farm-to-kitchen garden in conjunction with the Wood River FFA chapter. The center is licensed to enroll 80 youth from infants to 12 years old.

NRDs Adventure Camp about the Environment  Middle school students residing in the CPNRD are encouraged to attend ACE- Adventure Camp about the Environment (ACE), hosted by Nebraska’s 23 Natural Resources Districts and several education partners.  ACE Camp will is held at the State 4-H camp in Halsey, Nebraska in June. The camp is for students who will have completed 6th, 7th or 8th grades. While at the camp students will learn from experts in the fields of forestry, energy, wetlands, soils, range, water and wildlife. Students will also have the opportunity to participate in archery, zip line, tanking and tubing at the camp.  For more info, contact Marcia or call (308) 385-6282.
ACE Scholarship Application |  Brochure/Registration Form

Nebraska Youth Range Camp  Range Camp is for students between the ages of 14-18. The camp’s dynamic curriculum appeals to students with a wide array of interests including, but not limited to, rangeland management, conservation, ecology, animal science, and wildlife. Students who attend this camp will be actively involved with field activities, lectures, hands-on experience, recreational leadership, & team-building activities.  Central Platte NRD will reimburse qualified students in the amount of $100 after confirmation from the Society of Range Management that the students have attended the full camp.  CPNRD will request a list of camp attendees from the SRM and mail the sponsorship check to the parent listed on the registration form.  Students must request sponsorship prior to attending the camp by providing a copy of their registration form to Marcia Lee.

The Grand Island Groundwater Guardian’s Outdoor Learning Area located at the Nebraska State Fairgrounds in Grand Island, Nebraska, is designed to provide an attractive greenscape area while also providing educational opportunities regarding one of our most precious resources — groundwater.  The area is open to the public year-round.

It’s a great place for field trips by providing a stimulating place for play, learning, and environmental education– particularly water education. Local educators have used the area to educate students about butterfly migration, GPS technology, and native plants.  The Outdoor Learning Area is available year-round to allow educators and the public an educational, leisurely place to enjoy nature.

The Grand Island Groundwater Guardian Team is a 501(c)3 local nonprofit group that provides groundwater education to area youth, participates in community events, and updates and maintains the Outdoor Learning Area for the public. If you would like to donate to allow the Groundwater Guardians continue to offer these activities, contact the Grand Island Community Foundation at 308-381-7767. EIN#: 47-6032570 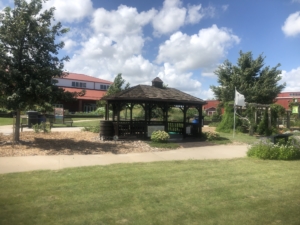 History Of The Outdoor Learning Area

IMPLEMENTATION  The Grand Island Groundwater Guardian Team realized the potential of educating thousands of people about groundwater and its uses when we received 1st place through a national online contest held by Rain Bird: The Intelligent Use of Water Awards! That first place prize was $10,000 to implement features such as a rain garden, bioswale, gazebo, cedar tunnel, prairie maze, and trees. The project received 30,597 votes; about 1,000 more than any other project in the country. Planning Commission in October 2016.  The award recognizes the Outdoor Learning Area as a place to beautify and improve the community.

FUNDING  After receiving the initial $10,000 from the online voting, the Guardians also acquired $47,500 in other grants from Vetter Health Services, Water For The West, Waterwise (NE Environmental Trust), Fonner Park, City of Grand Island and Nebraska Department of Environmental Quality.  The project would not have been possible without the support of Fonner Park, the Nebraska State Fair. The Grand Island Youth Leadership and Roots & Shoots have donated plants and their time to enhance the site.

Why? Increasing numbers of both children and adults are losing contact with the natural world. Reasons include the rapid growth of domestic air-conditioning since the 1950s; apprehensive parents who keep their children close to home; state-mandated curricula that do not allow time for study outdoors; and the overly-structured, hurried lifestyle of many people today. 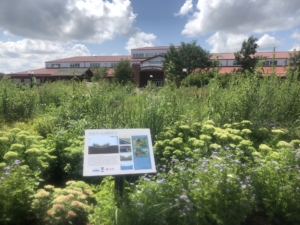 Rain Garden: The rain garden is a planted depression that allows rainwater runoff to be absorbed from impervious urban areas like roofs, driveways, walkways, parking lots, and compacted lawn areas. The public would be educated on how this reduces rain runoff by allowing stormwater to soak into the ground, as opposed to flowing into storm drains and surface waters which causes erosion, water pollution, flooding, and diminished groundwater. It will be designed for Nebraska-specific soils and climate. Native plants from all areas of Nebraska have been used because they don’t require fertilizer and are more tolerant of the local climate, soil, and water conditions. They also attract local wildlife such as native birds and butterflies. The plants include a selection of wetland edge vegetation, such as wildflowers, sedges, rushes, ferns, shrubs and small trees— will take up excess water flowing into the rain garden. Water filters through soil layers before entering the groundwater system. The site shows how the root systems enhance infiltration, maintain or even augment soil permeability, provide moisture redistribution, and sustain diverse microbial populations involved in biofiltration. Also, through the process of transpiration, rain garden plants return water vapor to the atmosphere.

Bioswale: This landscape element is designed to remove silt and pollution from surface runoff water. The location is near a swaled drainage area (a sidewalk) and includes gently sloped sides filled with vegetation, compost, and riprap. The water’s flow path, along with the wide and shallow ditch, is designed to maximize the time water spends in the swale, which aids the trapping of pollutants and silt.

Gazebo: The gazebo provides seating for a classroom setting and resting area.  The structure includes gutters and a rain barrel to educate

Kids Tunnel: This natural play feature was installed in July 2013 and uses flowering vines to cover the structure, creating a space for children to play and learn about plants, vines, and shade. 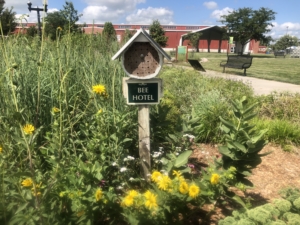 Bee Hotel:  The bee hotel provides essential nesting homes for solitary bees. These bees don't swarm or have a hive like the more well-known honeybees and wasps. Solitary bees are excellent pollinators. They pollinate our crops and ensure that plant communities are healthy and productive.

Prairie Restoration: This area was planted by the Prairie Plains Resources Institute. The prairie path combines the natural play feature with a need to cover a low area on the site with something other than turf. The prairie grass and forb roots help add structure to the soil and improve water infiltration over time. Simply mowing a path through the area allows the public to experience running through tall prairie grasses. The restoration process will take years to complete.

Areas Near The Outdoor Learning Area

4-H Building: During the State Fair, the 4-H building has several events. The remainder of the year, the building is utilized as a sports field house with baseball & softball cages, basketball courts, volleyball courts, soccer fields, and kids play area.

Raising Nebraska Building: This 50,000 square-foot building is just west of the outdoor learning area. It is two stories high with exhibition space on the ground floor and the Nebraska State Fair administrative offices on the second floor. It also features a museum area with information and artifacts from the past 144 years of the fair. The Department of Agriculture and the Nebraska Game & Parks Commission share the lower floor with meeting space available on the top floor. The Dept. of Agriculture’s interactive, technology-based displays promote agriculture in Nebraska and is available for use year-round. The display has been described as a Smithsonian-type display with simulators and videos.

Family Fun Center: During the State Fair, the Family Fun Activity Center is located under a large tent in the Family Fun Activity Center and provides all-day games, sanctioned games & competitions, a daily food eating contest, Make-and-Take activities, and much more for children of all ages. Butterfly adventures, which is an educational environment where people can interact with butterflies of many different species will be held daily in the Family Fun Zone, as well as The Pirates of the Colombian Caribbean Aerial High Wire Thrill Show, which is a daily grounds entertainment act with multiple showings a day.