In 1987, Central Platte NRD’s Groundwater Quality Management Program was the first in the Central Platte Valley to address widespread high groundwater nitrate problems. Nitrate levels in the groundwater and vadose zone have been reduced using a long-term, common sense management approach. Prior to the Program's adoption, nitrate levels in some areas tested at 19 parts per million. The current average is down to 13.3 ppm, however, there are high nitrate areas in the District that require monitoring.

CPNRD works with producers to implement best management practices and regulations as needed to reach safe nitrogen levels in groundwater. The Program utilizes cost-share payments to implement practices that use water and fertilizer efficiently. Annual reporting and water sampling in high nitrate areas is required. Another effective tool is the 400 demonstration sites located on local producers’ fields. 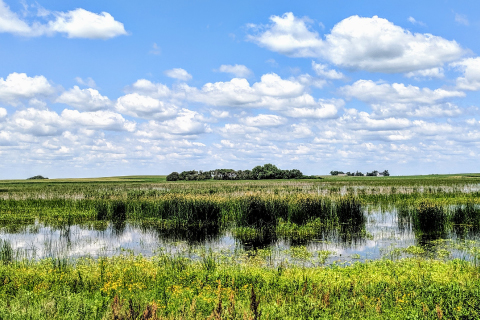 Use this link to click anywhere in the U.S. and follow where a water drop travels to the ocean. The USGS River Runner was designed for water science communication. https://river-runner.samlearner.com/

Because the phases are by area, individual wells in a Phase Area may be higher or lower than the designated range of nitrate concentrations. Other factors, including proximity to a municipal water supply and vadose zone nitrates, are also used in determining Phase Areas.

MAPS of each Phase Area available at http://cpnrd.gisworkshop.com

Nitrogen Management Program reports are due March 31st for all crops in Phase II & III Nitrogen Management areas and must be entered on the District’s online crop reporting form. The March deadline was set to allow producers to utilize UNL’s nitrogen recommendation for the upcoming irrigation season; which produces a recommendation for each field as users enter their data.  Web site address: cpnrd.gisworkshop.com

Water & Soil Tests
Producers planting corn, grain sorghum, or potatoes are required to take deep soil & groundwater samples for Nitrogen to include with the annual report. The form will ask the expected yields and credits for past legume crop and manure or sludge. UNL’s recommended nitrogen application rate will appear as the data is entered.

Water Samples: The groundwater analysis for nitrogen content should be taken on each field. Water sample bottles are provided by your agronomist, crop consultant, or lab.

Soil Samples: The deep soils analysis for residual nitrogen (NO3-N) must be taken on each field or 80-acre tract. The composite sample tested must consist of a mixture from no less than one three-foot probe every five acres. The report from the lab must be attached to the annual report.

Non-Compliance: Violations will be enforced prior to the irrigation season. Cease and Desist Orders will be mailed to producers who fail to complete and submit forms by the March 31st deadline. Potential penalties for violation are the possibility of a fine ranging from $1,000 – $5,000 per violation and/or loss of irrigated acres, ineligibility for NRD cost-share, and restriction from transferring irrigated acres.

Nitrogen certification is valid for 4 years. Producers with certification expiring will receive a certification test to be completed and returned to the CPNRD office. Certification from other districts is accepted and producers who attend CPNRD’s annual Water Programs Update are not required to complete the test. 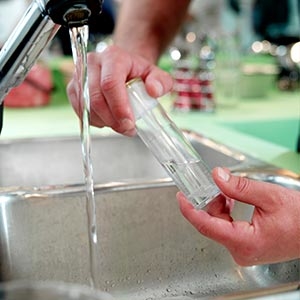 Why It’s Crucial to Sample Domestic Wells
Many rural homes in Nebraska have a private well rather than water supplied and treated by a municipality. Groundwater quality differs greatly throughout the state. Your home may have completely different water issues than your neighbor down the road. That’s why it’s crucial to test your water at least once a year to reduce health risks and ensure that your family has good quality water. The safety and
quality of the water is your responsibility when you have a private well. Well water may require some softening and filtration to make it ideal for drinking, cooking and cleaning. Here are other things you should know.
1.  Well Water is Groundwater that is Untreated   Groundwater is essentially rain that has moved through the soil and into the aquifer, likely absorbing a lot of other things along the way that could contaminate it.
2.  Water Stains/Smells  Stains in sinks, tubs and toilets may be lime scale due to hardness, however, more severe stains from well water come from high iron content. Iron is not a safety concern, but it can change the taste of your water and cause orange stains that are difficult to remove. The only way to prevent stains is to install special iron filtration systems that can also filter out sulfur, which usually has the smell of rotten eggs.
3.  Nitrates  Nitrate is the most common chemical contaminant in the world’s groundwater and aquifers, including the CPNRD. Several communities have levels higher than EPA’s recommended maximum contaminant level of 10 parts per million (ppm). A reverse osmosis (R.O.) system is recommended to treat water contaminated with nitrates. Nebraska farmers rely heavily on irrigation and Nitrogen fertilizer to grow millions of acres used in the global food supply chain; however, nitrogen that doesn’t get used by the crop ends up in Nebraska’s streams, lakes and groundwater. The primary source of contamination is overapplication on irrigated crops over decades. 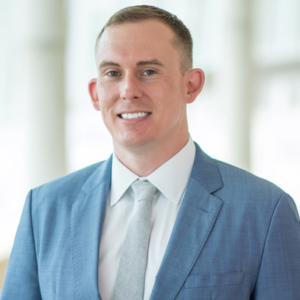 Jesse Bell, PhD and director of Claire M. Hubbard Professor of Water, Climate and Health at the University of Nebraska Medical Center reported to the CPNRD Board in March that Nebraska has one of the highest rates of pediatric cancer in the nation. UNMC and other states have found a correlation between nitrogen fertilizers, animal and human waste. The greatest exposure has been found in agricultural areas and private wells. High nitrate concentration in drinking water have been linked to Methemoglobinemia, colorectal cancer, thyroid disease and neural tube defects. Other cancers and diseases linked to high nitrate concentrations: kidney and bladder cancer, Non-Hodgkin Lymphoma, Alzheimer’s, Diabetes and Parkinson’s Disease.

High nitrate levels also create problems for small communities and rural water users. When a town’s drinking water well gets contaminated, a treatment plant isn’t usually an option because of cost, maintenance requirements and land space. Communities must explore options such as drilling a new well, blending water from multiple wells together, or hooking up to another community’s water system. To achieve this, communities apply for grants and loans and/or raise water rates.
4.  Naturally Occurring Elements & Minerals in Nebraska  Because water is a powerful solvent, groundwater dissolves organic matter including minerals found in the soil and rocks.
* Calcium & Magnesium These elements are what make well water hard and usually require a water softening system. They may not have a direct impact on your health, but could result in dry, itchy skin.
*Uranium  A radioactive element found in certain kinds of rocks and soils within Nebraska’s geology. Uranium is colorless, odorless and tasteless. The only way it can be detected in drinking water is to sample for lab testing. The chronic health effect associated with long-term ingestion of uranium is increased risk of kidney damage.
*Radon  A cancer-causing natural radioactive gas that you can’t see, smell, or taste. If present in your home, it may pose a danger to you and your family’s health.
*Arsenic  Some Nebraska groundwater supplies contain arsenic in high enough concentrations to present an increased risk of chronic poisoning. Research is being done to determine the exact connections between level of arsenic, duration of exposure, exposure combined with other elements, and health effects.

Vadose Zone Nitrate Study
In 2016, an agreement with UNL was approved for $80,000 to revisit vadose zone core sites originally collected in the 1990s, and to determine where additional cores may best characterize nitrate storage & estimated transport rates to the water table. Core samples were collected for vadose zone nitrate including some areas previously sampled.  The three-year study of vadose zone nitrate conducted by UNL graduate student Jordan Shields compared 27 locations within the CPNRD on a variety of land uses, topography and soil type with previously cored areas in the 1990’s.

The study also found several cores with over 2,000 pounds per acre of nitrate-N and significant concentrations of ammonia at depth in many locations. The report recommended further investigation of Phase II areas and in locations with vadose nitrate measuring more than 2,000 pounds per acre.

The Nebraska Department of Environment & Energy recently launched the Groundwater Quality Clearinghouse website with over 1.6 million sample results from 33,000 irrigation well locations taken by the NRDs. Key features of the map are well locations, nitrate measurements, along with 281 minerals and chemicals whose well compositions were analyzed. The map also showcases aquifer locations, topographic regions and bedrock geology. The site has practical uses for the public. Farmers can check the composition of existing groundwater for chemical content to see how much fertilizer they will need, and gauge which locations have land suitable for raising livestock.
Visit the website at clearinghouse.nebraska.gov

The Crop Reporting Website is updated with more user-friendly features! Each page of the form is now auto-saved. UNL’s recommended Nitrogen application rates are visible and adjusted as you fill out the form, so you will see the results of each application. And you’ll receive an email receipt when your form is submitted successfully. cpnrd.gisworkshop.com

How to Sample Your Well
Sampling your well at least once a year will give you a good representation of the aquifer at the well location. Always contact the lab before sample collection since different water tests often require different methods of collection and delivery. Lab staff may suggest specialized water tests based on your location or needs. Water quality data are only as good as the water samples from which the measurements are made. The following collection steps are general, be sure to contact your lab for specific instructions to prevent contamination and improve accuracy.

1.   Label your sample bottle(s) with a permanent pen. Include where the sample is being collected, either address or owner’s name.
2.  Observe your well for any damage. If the wellhead is damaged, consider requesting a sterile bottle for bacteria testing and contact a licensed well driller for repairs.
3.   Locate your sampling point. An exterior faucet or hydrant closest to the well is best.
4.   Allow faucet or hydrant to run for 5 to 10 minutes. This ensures a fresh sample from the well.
5.   Avoid contaminating your sample. Carefully remove the cap and do not touch the inside of the bottle.
6.   Proper Storing: Fill the bottle and store it in a cooler with ice or an ice pack.
7.   Deliver sample to the lab. See local lab information below.

Sampling once a year will help you observe trends and give you insight into filtration needs. Be sure to collect a sample after wellhead damage or repair and major flooding. If you have a reverse osmosis filtration system in your home, consider testing the filtered water and the unfiltered water. Reverse osmosis filters need to be changed regularly to maintain effectiveness. Comparing the two sample values will provide a good indicator of how that system is working. 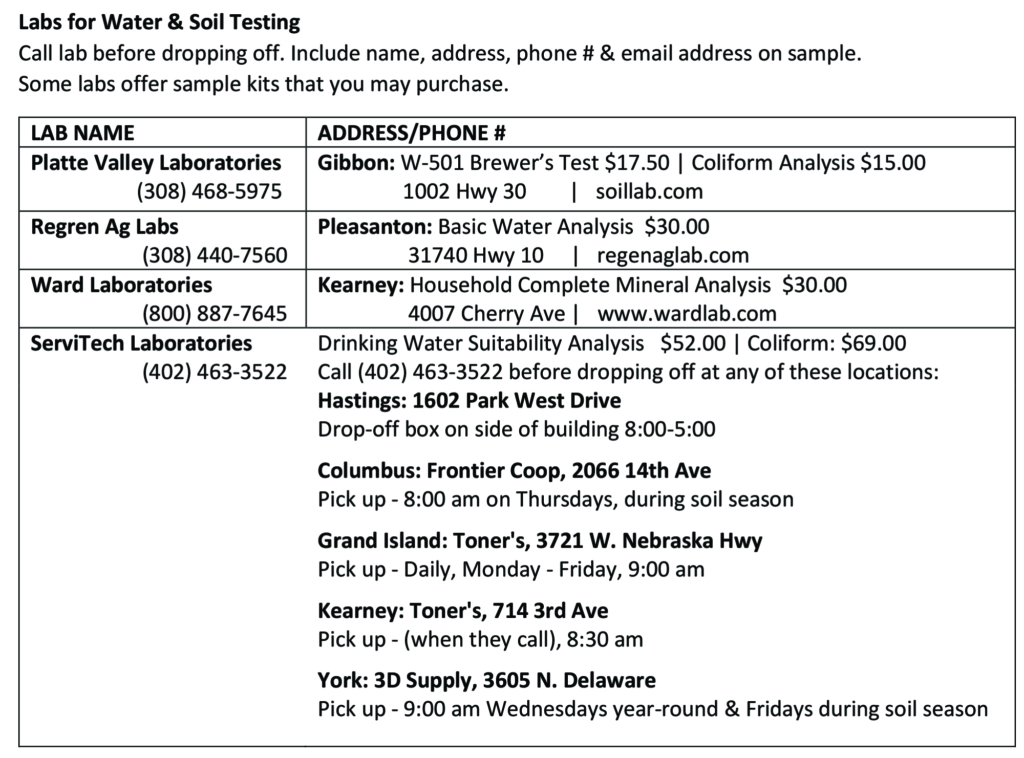