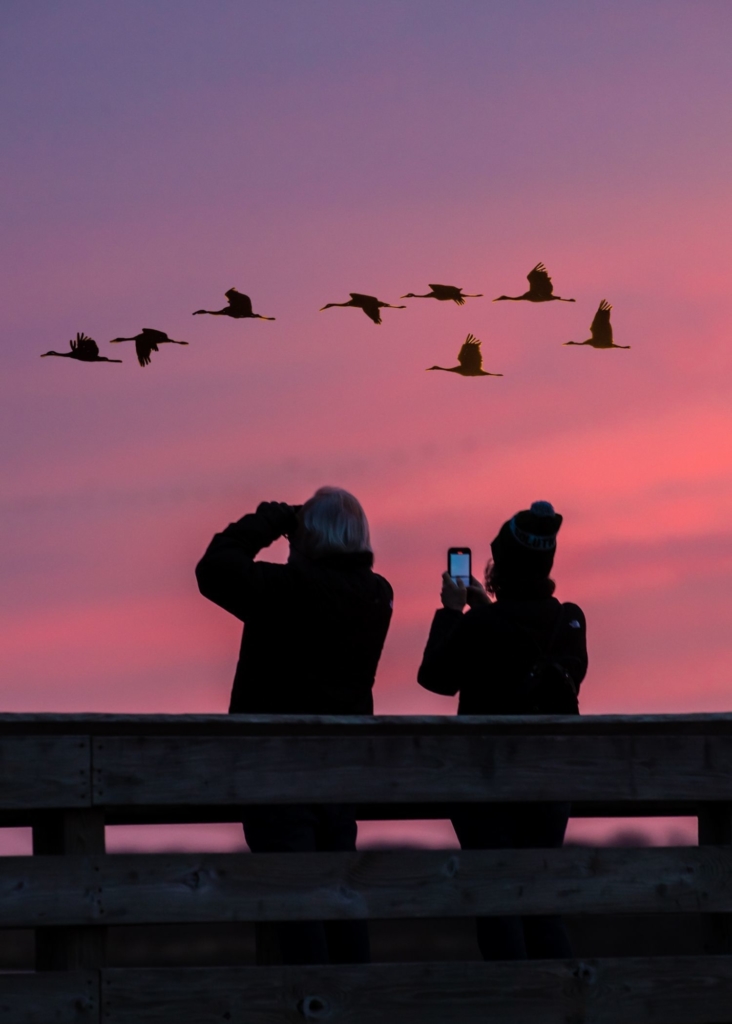 Richard Plautz Crane Viewing Site - Gibbon
Central Platte NRD received two grants to assist with rehabilitation of the Richard Plautz Crane viewing site in Buffalo County at the intersection of Elm Island Road & Lowell Road. The site consists of two elevated wooden viewing decks, a 1,650-foot trail, and a parking lot to provide a safe area for the public to view Sandhill and Whooping Cranes as they migrate through Nebraska in the spring and Nebraska’s Platte River wildlife.

Grants Received: $259,500.00 from the Recreational Trails Program (RTP) administered by the Nebraska Game & Parks Commission, CPNRD contributed a 20% matching share. The 1,660 LF deteriorated asphalt nature trail was replaced with an 8’ wide, 6” thick concrete trail and pave the 1,033 square yard gravel parking lot with 8” thick concrete. $50,000 from the Nebraska Environmental Trust for repairs on the streambank near the viewing decks. The NRD removed two large trees, and installed 2,700 LF of erosion control silt fencing, 803 tons of quartzite riprap on the southeast side of Lowell Road bridge and 0.6 acres of seeding and mulching.

Alda Crane Viewing Site
In January 2022, CPNRD's Crane Viewing site near Alda was awarded a grant through the Recreational Trails Program (RTP) administered by the Nebraska Game and Parks Commission. Located two miles south of the I-80 Exit 305 along the Platte River, the crane deck provides a safe area for the public to view Sandhill and Whooping cranes as they migrate through Nebraska in the spring.

In the mid 1990’s, Central Platte NRD (CPNRD) was a partner in building the site to increase public safety by reducing the extra in-flow of traffic and cars parking on nearby county roads, which are heavily used by residents. The site also increases public awareness of Nebraska’s Platte River wildlife.

CPNRD was awarded $250,000 from the RTP to replace the existing trail with a new 1,047-foot-long, 10' wide, 6" thick, concrete recreational trail. The site’s three existing gravel parking lots will be paved with 8” thick concrete to make the area fully ADA accessible. RTP funds will also be used to replace the site's 30-year-old wooden viewing platform and cost-share a portion of the Quartzite riprap.

Project sponsors are required to have their 50% share of the total project costs on hand since sponsors must initially pay for the facilities before requesting reimbursement from the federal government. CPNRD has also requested $75,000 from the Nebraska Environmental Trust Fund (NET) for non-trail related improvements associated with the Alda Crane Viewing Site Restoration Project.

Recreational Trails Program Funding comes from the Federal Highway Administration. Commissioners approved grant awards totaling nearly $1.8 million for the Land and Water Conservation Fund Stateside Assistance Program. The Land and Water Conservation Fund (LWCF) is a federal grant program that was established in 1965 through the National Parks Service within the Department of the Interior.

As the sun came up Saturday morning, Dave Baasch couldn’t believe what he was seeing at the Crane Trust near Alda.  Ahead of him in a field were 46 whooping cranes, one of the most endangered bird species in the world. It was the largest group ever documented in the United States outside of the Aransas National Wildlife Refuge in Texas, where they overwinter.

“This job is the love of my life, and I’ll never see it again," said Baasch, the threatened and endangered species specialist for the Crane Trust. “That’s a huge moment I will never forget.”

Those birds were part of an even larger group of 95 whooping cranes that have stopped during their migration south, more than ever before seen at one time in the area around the Platte River in central Nebraska.

Could birder tourism catch on in Nebraska? The Platte River Recovery Program counted the birds between Chapman and Nebraska 10 near the Audubon Rowe Sanctuary on one of the daily flights it’s been doing during migrations since 2001.

“That’s a really impressive number,” Rowe Sanctuary Director Bill Taddicken said. “That’s close to 20% of the population. There is only a little over 600 remaining.”  Usually, about 12 to 16 whooping cranes are spotted moving through central Nebraska from mid-October to early November. They’re on their way from the Wood Buffalo National Park of Canada, where they nest, to Aransas.  Taddicken said he isn’t sure why there are so many more birds this fall.

“It just depends on the weather and all kinds of different things and what the birds like,” he said.

A reluctance to fly into a strong south wind may have kept them here, but he expects them to head out quickly as colder weather moves in from the north this week.  Baasch thought they would all be gone by Tuesday.  Taddicken said that in the mid-1950s, there were only about 15 whooping cranes left in the world. Lots of work has been done by the United States Fish and Wildlife Service and others to protect them since then, he said.  The National Audubon Society and Crane Trust have contributed by protecting the Platte River and the habitat surrounding it. A stretch from Lexington to Denman has been designated as critical habitat.

“Over the years, the USFWS has led efforts in protecting and studying the whooping cranes in an effort to bring them back from the brink of extinction,” Taddicken said. “Efforts continue today with river land protected and managed by conservation groups like Audubon’s Rowe Sanctuary, Crane Trust, the Nature Conservancy, as well as the efforts of the Platte River Recovery Implementation Program.”

The more than a million sandhill cranes that come through in the spring are also winging their way south for the winter. “We’ve had both the last few days. They don’t gather in big numbers in the fall,” he said. “They usually just stop for the night and move on.’’

The Platte River valley and neighboring Rainwater Basin provide essential food and nutrients for Sandhill Cranes, Whooping Cranes, and other waterfowl during migration and during nesting season. At least 257 species of birds have been observed in the Rainwater Basin including 27 species of waterfowl, 27 species of shorebirds, and 5 threatened and endangered species–whooping cranes, bald eagles, least terns, piping plovers, and peregrine falcons.

Disturbances can jeopardize their health, physical condition and reproductive success. Encourage others around you to use the following proper etiquette:

In 1993, a task force of various governmental & private agency representatives was brought together by Central Platte NRD to develop ideas in response to concern about safety for local residents, farmers and crane watchers in the Central Platte Valley, especially during early morning and late afternoon hours on local roads. The Task Force developed a comprehensive plan known as the Central Platte Historic, Scenic & Trails Project to be completed in phases.

Approval was granted in 1994 by the Nebraska Department of Roads under the federal Intermodal Surface Transportation Efficiency Act (ISTEA) for Phase I of the comprehensive plan developed by the task force. According to the grant application, the multi-year project promoted awareness of the historic importance of the Central Platte Valley as a transportation corridor dating from the early 1800s. The corridor was used by explorers such as Stephen H. Long and John Charles Fremont and by fur traders who passed back and forth on and along the Platte River. In the period from the 1840s-1860s, the Platte River Valley was a virtual “superhighway” as the major transcontinental route of the covered wagon migration; it became known as “The Great Platte River Road.”

Three roadside turnout areas between Doniphan and Shelton on the road along the south side of the Platte were developed in Phase I. A portion of the cost was paid under the ISTEA and the remaining cost was contributed by the NRD and participating counties-Hall and Buffalo. The Audubon Society provided land for a roadside turnout near Shelton. Use of the Platte River for recreational purposes occurs now, but it is restricted by accessibility and use of the river by endangered and protected wildlife species.

Rowe Sanctuary will delay registration for all 2021 crane-viewing programming until at least Monday, February 1, 2021. To accommodate for smaller groups and social distancing guidelines, Rowe will only be providing the general crane viewing experiences and the overnight photo experiences this year for a tentative crane season from March 6 to April 11. Registrations will require a COVID-19 waiver for all registrants. Tours are subject to cancellation on short notice; fees will be fully refunded when it is necessary to close because of health concerns. Crane season updates will be posted on rowe.audubon.org/craneviewing and the Rowe Sanctuary social media accounts. If you have questions about the upcoming season, email rowesanctuary@audubon.org.

For those who are no longer able to see the cranes in person, Center Director Bill Taddicken recommends the live crane camera through Explore.org as a great alternative for people who want to experience the migration. Taddicken said: “People can now see the cranes from anywhere in the world.” Click here to watch.

Join us for our first ever Virtual Crane Tours — coming in March 2021 — by making a donation of $75 or more. Experience all the spectacle of the sandhill crane migration without leaving the comfort of your home!

Non-Pandemic Visits: Come inside to discover the Wild About Nature Display including murals and touch-screens full of information, shop the Crimson Crown Gift Shop and view magnificent photographs and art in the Hornady Art Gallery. When you venture outside you’ll encounter the butterfly garden, a small research herd of American bison along the path to a 35′ observation tower which is located near two footbridges leads to roughly 10 miles of nature trails along the Platte River.

The Crane Trust’s Wild Rose Ranch is located in south-central Nebraska on 5,000 continuous acres of native grassland prairie and wet meadows that are owned and managed by the Crane Trust. The main ranch facility is closed to the public. It includes the headquarters office, research laboratory, dormitory, Legacy Cabins, meeting/dining facilities, private crane-viewing blinds, and an outdoor deck and observation platform with breathtaking views of the tallgrass prairie and Platte River waterway. Reservations are required to access this rare ecosystem which includes an uninterrupted seven-mile stretch of the historic Platte River, which has been preserved by the Crane Trust to mirror the unique and extraordinary habitat that has been used by the endangered whooping crane and two sub-species of sandhill cranes for millennia.